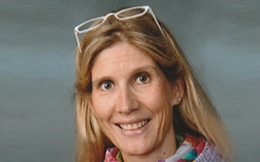 Marja K. Martikainen (M.A., Principal of the Viikki Teacher Training School of the University of Helsinki.) has made her career in the teacher education at the University of Helsinki. She studied at the University of Helsinki, graduated as a German and Swedish teacher and was in 1989 employed by the Teacher Training School as a German teacher and teacher educator. In 2003-2005 she was working as a Lecturer for foreign language didactics at the Faculty of Education and in 2005-2009 she was involved in the development of subject teacher training at the Faculty of Arts. Since 2012 she has been working in the school leadership of the Viikki Teacher Training School, now leading the Lower Secondary School. At the University of Helsinki, she has also taken part in the quality assurance process, research projects in language education and assessment, curriculum processes and several international projects in teacher education. She has been educating herself also in leadership science at the University of Jyväskylä. Since 2011 she is a Faculty Council Member of the Faculty of Education. Besides her university career she has been working as a German textbook author for the publishing company Otava (1993-1999), as an external evaluator in international mobility programmes, like Comenius, for the National Agency CIMO (2005-), as an expert in language education for the National Board of Education and as an in-service teacher and principal educator. In May 2015 she was the keynote speaker and panellist in the Conference on Internationalization of Teacher Training in Bonn, organized by the Kultusministerkonferenz of Germany. Another remarkable international work experience for her was to lead the work of a local team to create the new national core curriculum for German and other languages in Bosnia and Herzegovina in 2004. That project was funded by the European Council. Since 2015 she has been cooperating with BNU affiliated schools in China. In 2008 Marja K. Martikainen was rewarded by the FIPLV (Fédération Internationale des professeurs de Langues vivantes) with the International Award Certificate of Honour.